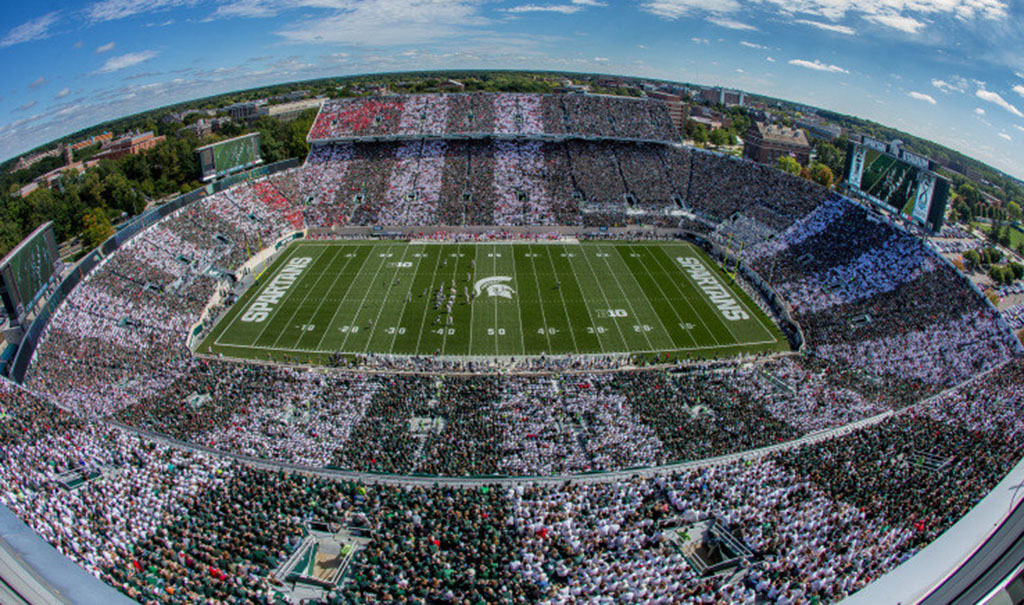 Spartan Stadium represents a tribute to Michigan’s State’s football and a vote of confidence for its future. The stadium was formerly known as Macklin Field and Macklin Stadium. It was opened in 1923 in East Lansing, Michigan.

School officials decided to construct a new stadium to replace the Old College Field in the early 1920s and thus, Spartan Stadium was born. The initial seat capacity of the stadium in 1923 was only at 14,000. In 1935, the school increased the seating capacity to 26,000 and the newly renovated arena was dedicated as Macklin Field. The name Macklin Field was given in honor of former coach John Macklin. He was the person in charge of putting Michigan State Football on the map. With his coaching and leadership, Michigan State reached a 29-5 record from 1911 to 1915. Many of the victories were over considerably big-names such as Michigan Wolverines, Notre Dame, Ohio State, Penn State, and Wisconsin.

Michigan State was admitted into the Big Ten in 1948. As soon as they were admitted, they increased the stadium capacity to 51,000 and the field was renamed as Macklin Stadium.

After admittance into the Big Ten in 1948, Michigan State increased stadium capacity to 51,000 and the field was renamed Macklin Stadium.

With Spartan football attracting national attention under coaches, Clarence “Biggie” Munn and Hugh “Duffy” Daugherty, 9,000 seats were added in 1956. The following season, the east and west sides were double-decked, boosting the capacity to 76,000. That same season, the stadium received its current name, Spartan Stadium.

The stadium went through a number of expansions and upgrades over the years. In August 2005, a new press box, 24 luxury suites, and 862 club seats were constructed on the west side of Spartan Stadium. This addition made Spartan Stadium the tallest building in East Lansing.

After the addition of luxury boxes and club seating in 2004–2005, Although it has held more than 80,000 fans, the official capacity of the stadium grew from 72,027 to 75,005. The expansion made Spartan Stadium the Big Ten’s sixth largest stadium.

Eleven years later, another major renovation was made to the stadium. In December 2016, the Michigan State Board of Trustees approved a $13 million project. It was to include an addition to the south end of Spartan Stadium that opened prior to the 2017 season. The 20,000-square-foot single-story project featured the addition of 236 bathrooms, four concession stand areas (completed as a separate project for the 2018 season), and movement of the ticket entrances out from the stadium structure to create donor plazas, and renovated gates similar to the North End Zone. Additionally, permanent light structures, featuring LED field lighting, were installed over the summer in 2017 as part of the requirement of the new Big Ten broadcast agreement.

Through the 2012 season until their game against Notre Dame, the Spartans had won 15 straight games in Spartan Stadium. It was the program’s longest home streak since winning 19 straight from 1950-53. Michigan State went undefeated at home in back-to-back seasons (2010 and 2011).

Some other notable football games held in Spartan Stadium are as below:

For more information on the Spartan Stadium, please see the specific pages below.

Seating Information:
For information on accessible seating and to view the Spartan Stadium seating chart page.

On the morning of each home game, the team completes a 10-minute walk. The walk starts from their hotel at the Kellogg Center, crossing the Red Cedar River, passing the Spartan Statue and finally into the stadium.

Fans would gather by the sidewalks, applauding and cheering “Go Green, Go White.”

“It’s a beautiful day for football!”

Regardless of how the weather actually is, the PA announcer would declare that “it’s a beautiful day for football!”. Usually, the phrase is said after the PA gives the weather forecast and is said with the help of fans.

Clips from the movie 300 were added to the “Thunderstruck” introduction sequence in 2007. Fans would see a clip of Spartan King Leonidas shouting, “Spartans! What is your profession?” played whenever the opponent is in a third-down situation. The crowd would then responds with an emphatic “Ha-Ooh! Ha-Ooh! Ha-Ooh!” while thrusting their fists in the air as if they were carrying spears, just like in the movie.

On October 16, 2010, the “300” main actor, Gerard Butler attended the Spartans’ homecoming game as a surprise to fans. At the beginning of the game, Gerard Butler walked onto the field repeating the familiar call to fans.